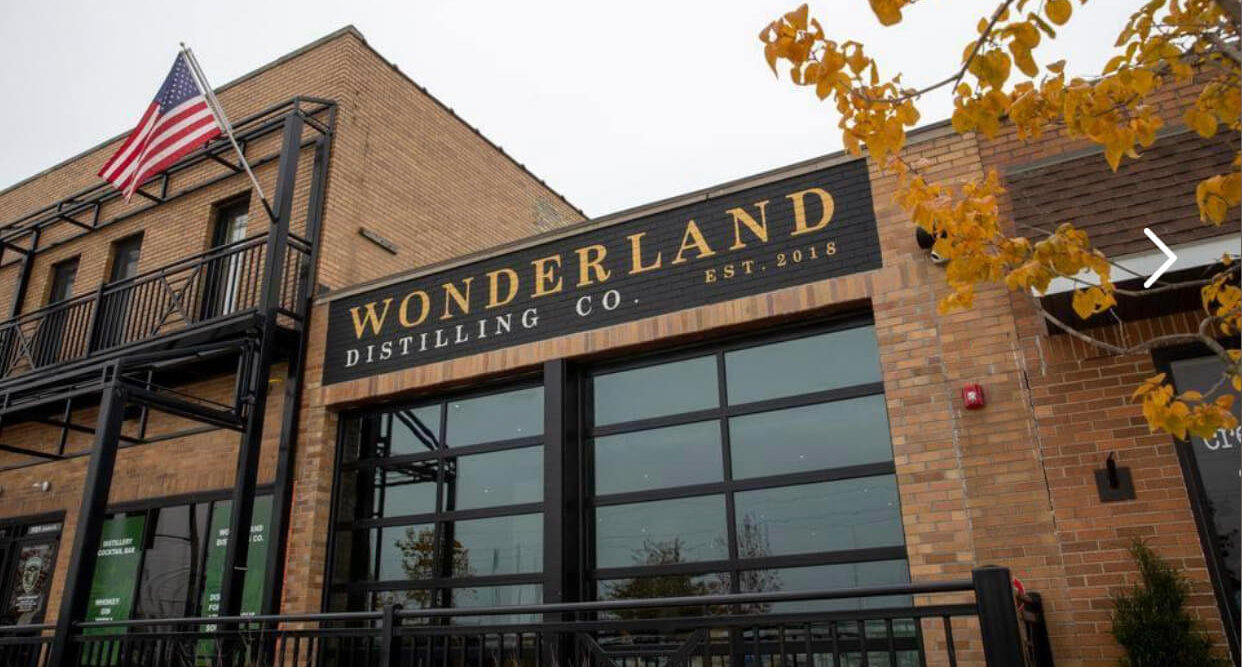 Wonderland Distilling Co., which began production in Muskegon Heights last year, opened its craft cocktail tasting room to the public on Monday at 1989 Lakeshore Dr., featuring spirits distilled nearby and a style that nods to the natural wonders of Michigan.

The bar offers classic cocktails, house-made recipes and mocktails, and a food menu of small plates. Many of the offerings pay tribute to Muskegon and the wider West Michigan area, with local ingredients used in the drinks, and seafood and game on the menu nodding to Michigan’s natural abundance.

“We take great measures to basically make everything in-house,” said Allen Serio, the company’s chief marketing officer, who co-owns the distilling business with CEO Mark Gongalski. “So as you would have a scratch kitchen, we’re a scratch bar.”

That Michigan influence can also be seen in the spacious, bright interior, where shiplap lines the bar, and salvaged lumber from the old Sappi plant – which stood nearby until 2017 – will be used for the shelving above it.

Lining the wall, too, are herbs, bitters and botanicals, the elements used in crafting the drinks, which Josiah Gentry, the general manager, designed, and which center around the distillery’s whiskey, vodka and gin.

All front-of-house employees will be trained to explain the drinks and the ingredients that comprise them, Serio said.

That’s part of an effort to make the world of craft cocktails accessible to anyone, Serio said.

Drinks will range from $6 to $12, he said, ranging from simple mixed drinks, like vodka-cranberries or whiskey and Cokes, to Gentry’s housemade cocktails.

“That was our way of, somebody who’s unfamiliar and can be intimidated by a twelve-dollar drink, to see value in coming out, hanging out, enjoying the atmosphere, getting to know our staff, getting to know all the labor that goes into these other drinks, and then gateways into other craft cocktails,” Serio said.

“They’re not committed to coming in and having to spend a high-dollar amount on that. We put a lot of thought into making it approachable.”

Cocktails will also be available to be canned on the spot and taken to go: “If you’re heading out on the boat or to the beach, you can get a four-pack of gin and tonics or Old Fashioneds and just open them and pour them over ice, and you’re good to go,” Serio said.

Some of the in-house cocktails are themselves spins on classic cocktails, like the brown butter Old Fashioned and a hibiscus gin fizz.

Others are more unique to Wonderland, like the Electric House, featuring saffron gin and pineapple syrup, and the Clipper, named for the historic ship docked down the road, with a housemade red apéritif and whiskey.

“Most craft cocktail recipes are a riff on a classic recipe to begin with,” said Gentry, who got his start in the craft cocktail world at the Winchester and former Gray Skies (now Eastern Kille) Distillery in Grand Rapids, and continues to commute in from there.

“Those are kind of the foundations for everything that we do. We basically just play Mr. Potato Head from there by swapping out ingredients until you have something that’s unique to your bar.”

Gentry said his goal in building out the drinks menu was also to highlight local ingredients – for example, the apple liqueur uses apples from Schwallier’s orchard in Sparta, Mich. – while minimizing food waste.

“As many opportunities as we can to complement local ingredients, give back to the community, those are in our drink menu,” he said.

Right now, the tasting room offers whiskey, gin and vodka distilled at the company’s production facility, at 2217 Lemuel Street in Muskegon Heights. It also uses those spirits as the basis for other cocktail ingredients, such as bitters and liqueurs.

Eventually, Serio said, the company aims to be a “whiskey-forward” company, producing a wider range of bourbon and whiskey-based drinks.

The first product made available for broader distribution, beginning on Aug. 1, was a whiskey blend, which is now available in almost 100 locations across Michigan, Serio said.

“Now that the cocktail bar is open, it gives people a chance to taste it, fall in love with it, and then go buy it,” he said.

Eventually, the goal is to expand distribution across state lines – somewhere adjacent to the Mitten, he added – and to also begin distributing the company’s gin.

For now, a person can buy a bottle of whiskey, gin or vodka at the bar to take home.

The bar’s drinks menu will soon expand, Serio said, as will its food offerings, which will eventually include soups, salads and sandwiches, as well as snackable bar food, like a charcuterie board with wild game, duck dumplings, and a smoked trout dip.

“We probably won’t ever do full-on entrée service, but we’ll definitely be a food option in Lakeside,” said Serio. “That food will complement the champion of the place, which is the cocktails and spirits.”

Serio and Gongalski first leased the Lakeshore Drive space last August, expecting to open later that fall. But construction was delayed, then pushed back even further when the coronavirus hit.

But there was a strange twist of fortune that kept things moving ahead: Along with Burl and Sprig, on Western Avenue, Wonderland was one of two local distilleries that reoriented their production away from liquor and towards producing hand sanitizer as the pandemic began to ramp up in Michigan and protective supplies remained sparse.

While the company had to halt construction on its future bar, “the production space went into overdrive, because there was an immediate, overnight demand for hand sanitizer,” Serio said. “So the losses we were incurring here, we were gaining them back through the hand sanitizer sales.”

Now, as the company returns to producing alcohol for its intended purpose – which is to say, drinking – Serio said he hopes that people visiting the bar will also understand the relationship between the labor of distilling in the Heights and the experience of enjoying a craft cocktail in Lakeside.

MUSKEGON, Mich. — Muskegon’s own Wonderland Distilling has been nominated…

As we head into the unofficial start of summer, many…